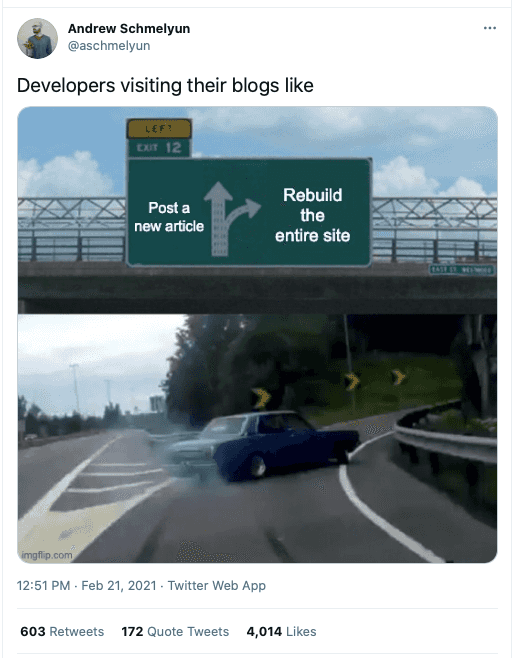 I’d been inspired to think about self-hosting by Trisha Gee’s switch from Blogger to Hugo. But of course I couldn’t just create a Hugo site. Instead, I had to investigate lots and lots of various tech stack options. 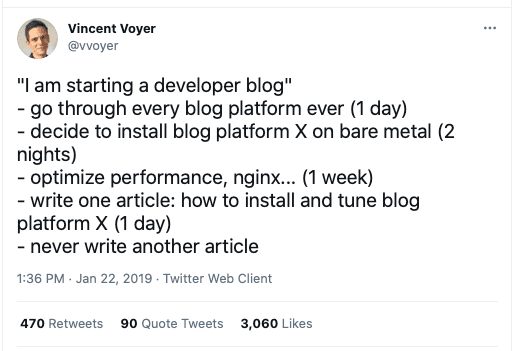 In my defence, there was a seven year gap between when I read Trisha’s post in 2014 and when I actually took the idea to action. I’m slow. So it wasn’t unreasonable to assume that the static site world might have moved on while I was busy being slow. (It turns even Trisha’s moved on from Hugo, to Wordpress.) Trisha’s site rebuild notwithstanding, Hugo is still a popular static site framework. But not the only one: 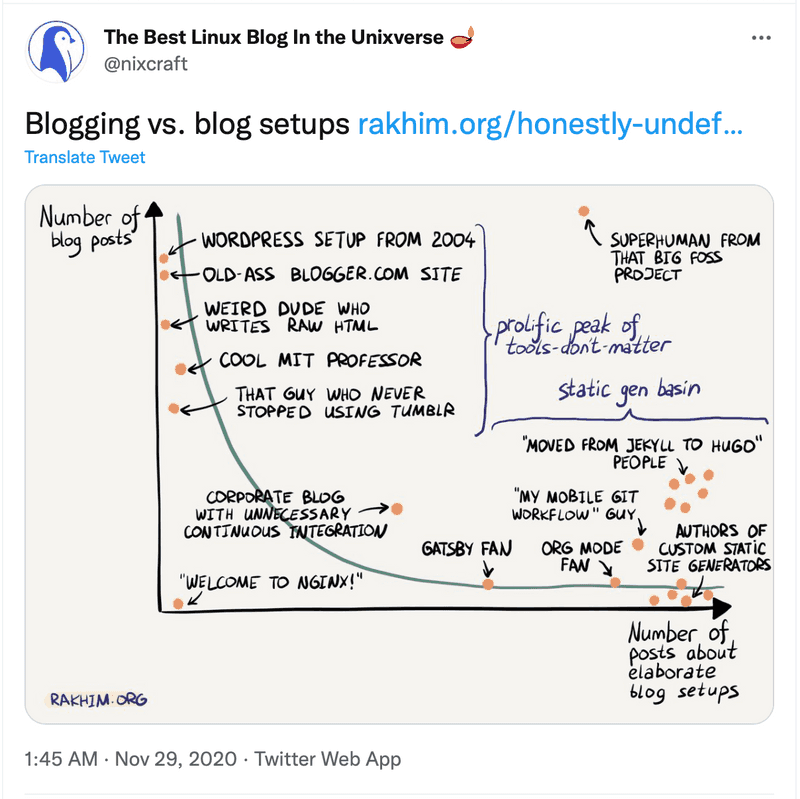 I’m a coder. Of course I wasn’t going to use an antiquated, simple setup, even if it was actually very productive. I needed continuous integration! And complex dynamic behaviour! The leading static site generators were Hugo, written in Go, and Gatsby, written in React. I need to improve my Go, and building a Go blog would have been a great way to do that. I resisted temptation and decided to (sort of) prioritise productivity by going for Gatsby.

It took me a while to settle on a platform, and then a while to find the right starter, and then I spent several weeks adjusting the starter to support unit tests, and setting up a CI/CD pipeline with integration tests. I didn’t quite get to the point of setting up a Kubernetes cluster to run my static blog, but I wasn’t far off. 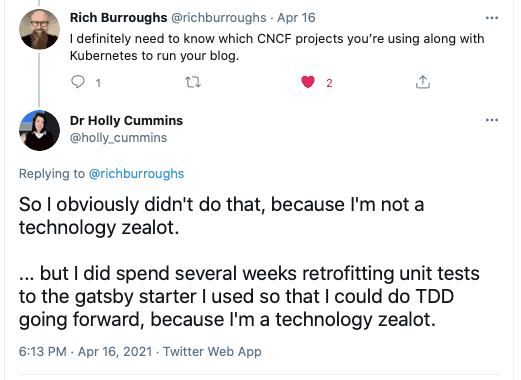 Once I had a unit test skeleton in place I felt able to start adding new capabilities to the platform. A lot of my writing is published elsewhere, and some of my content isn’t even writing, it’s slides and podcasts and external media. (I got profiled in Forbes! That has to go in somewhere!) So I needed a hybrid between a blog and a portfolio site. I wasn’t just looking for an excuse to code, honest.

Now that things are up and running, I’m trying to balance time spent on writing and time spent on improvements to the base platform. I wasn’t going to be That Developer: 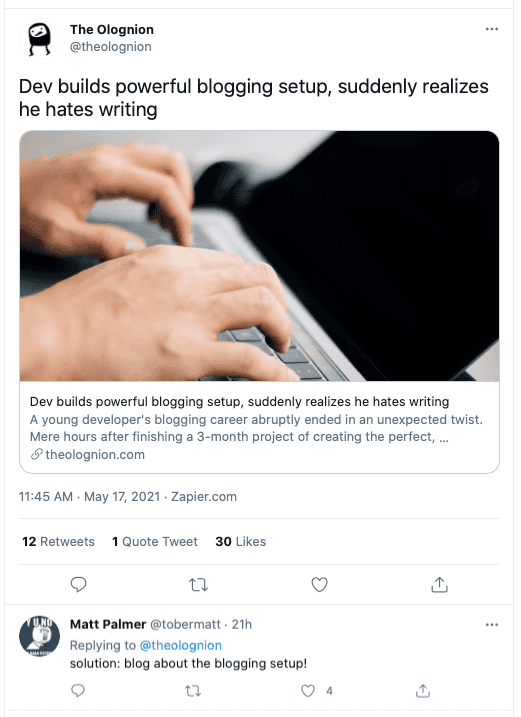 I was also determined that the things I wrote about were going to be things other than my blog tech setup. 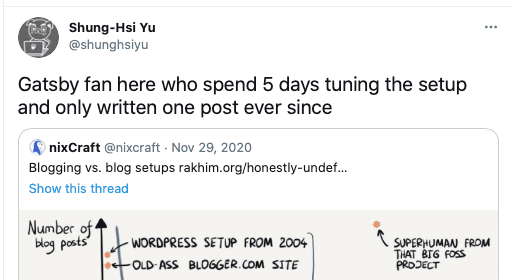 No no, no snake-eating-its-tail blogging for me!

And I was going to write actual posts about actual things! 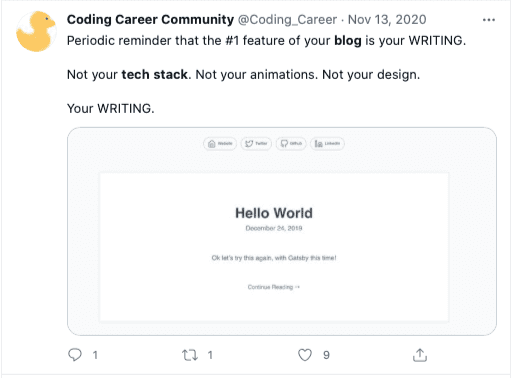 If anything, I’ve probably done too good a job of focussing on content in the past year, at the expense of sorting out the platform capabilities. I still need to figure out the right solution for slides. At the moment they’re hosted separately, and I pay for that. They’re not even cross-linked into the main content feed. (I like Notist, but the price of Notist Pro pains me, because I am a cheapskate.) Several people have asked for RSS feeds, so I need to sort that out. And my search is a bit busted for external links, so I need to change what gets fed to the indexer.

Ok but what is the stack?

The source code for this platform lives at https://github.com/holly-cummins/gatsby-platform.

This blog is a GatsbyJS blog, based on Greg Lobinski’s HeroBlog starter. I’ve extended it to make it easy to embed external content and to add different forms of content. There are microanalytics.io Analytics and Algolia search integrations. The README has getting started instructions and more technical details.

I pull some graphics from unsplash and draw others. A lot of the visual design is the same as in the starter.

I’ve got the TDD habit, so it made me feel a bit itchy that all the gatsby code I was looking at was test-free. I added some Jest unit tests, and also some puppeteer integration tests. It would benefit from more tests, but at least it has some now.

I use namecheap.com for my domain. I also have hollycummins.fun redirecting to this site, although I’m not publicising that awesome URL as much as I hoped I would. (Remember, fun in the workplace is important.)

I use GitHub Pages for the hosting and GitHub Actions for the CI/CD. It’s free, and I am a cheapskate.

I’m using Apple Reminders as my work tracking system, but I should probably switch to GitHub issues. 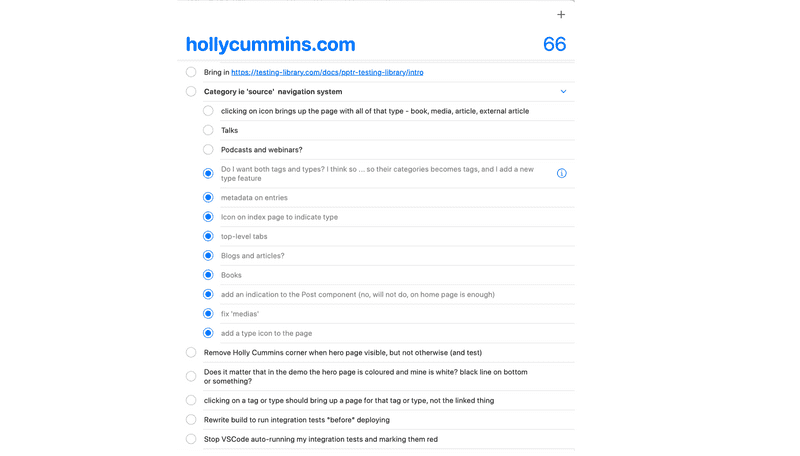 The platform code for this blog shares the MIT license of the source starter. If you use my fork I’d love to know about it. You can see what the starter looks like without my content at gatsby-platform.hollycummins.com.

Most of the personalisation is in the content folder, but there are a few bits and pieces elsewhere, like avatar.jpg and src/images/jpg.