In part i, I explained why I started drawing despite not having much artistic talent. Practice has helped me move from ‘totally inept’ to ‘mostly inept’. Here are some of the other techniques I’m using to improve. 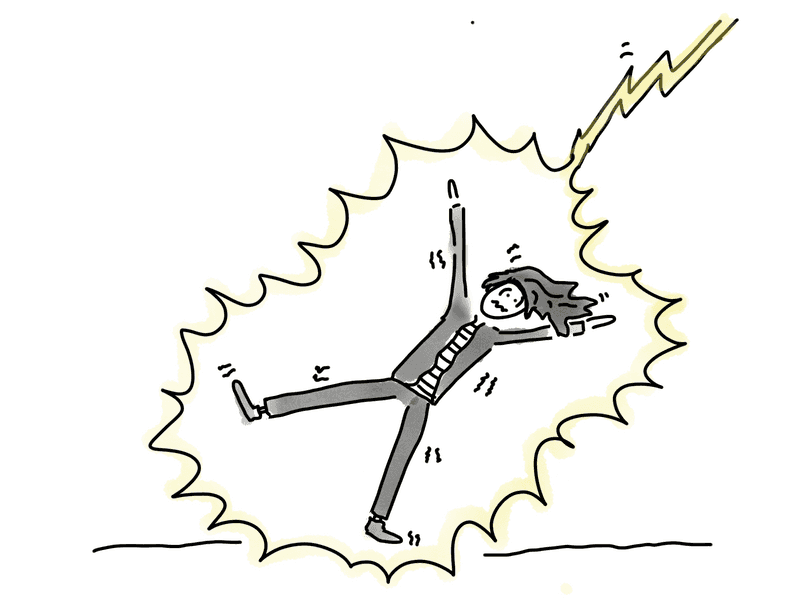 2021, self portrait. Learning from failure is important. Laughing at failure also helps.

Carol Dweck observed that part of a growth mindset is seeking out people who do the thing you’re trying to do better than you can do, so you can learn by example. (In contrast, people with a fixed mindset tried to cheer themselves up by looking for people who were even worse.) Some of the improvement in my drawing has come from just doing the thing, over and over again. But I’m also trying to be a bit Sherlock-Holmesy and observe, rather than just seeing. When I see a drawing I like, I study it. What about it do I like? What techniques did they use? Could I use those techniques?

Sometimes, the answer is ‘no’. I’m limited. Anything detailed or life-like or complex is beyond me. But even drawings with only a few simple lines can be powerful. For example, Charlie Mackesy’s pictures only have a few splotches of colour and squiggles but they’re so evocative. (I haven’t embedded any of his pictures to respect his copyright, but do go have a browse of his site.)

I assumed drawing was an innate talent, but it can be taught. Here are some of the resources I’ve been learning from:

One of the things on my todo list is to explore other drawing tutorials. Red Hat do regular Days of Learning, so perhaps I’ll take my next one for drawing instruction. I might even be confident enough to work through lessons aimed at adults.

For my Kubecon keynote I tried icon-shaped people instead of stick figures: 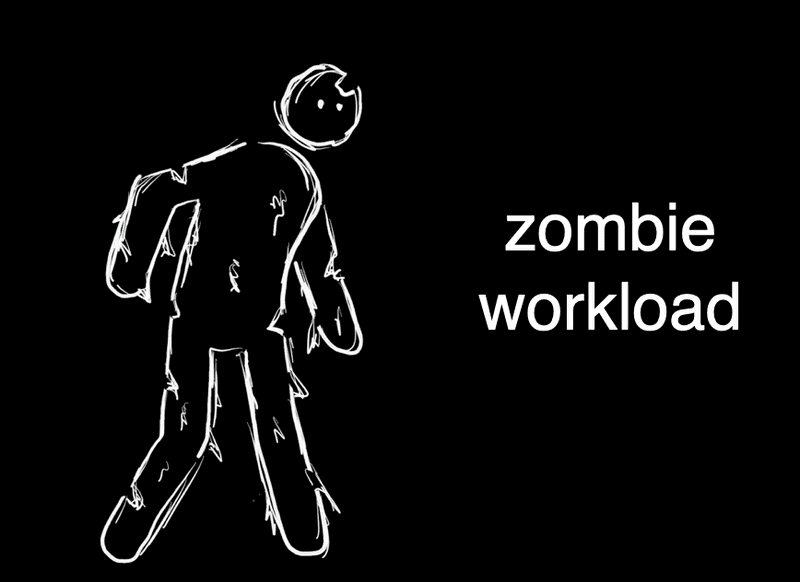 I used loose sketching instead of thick lines: 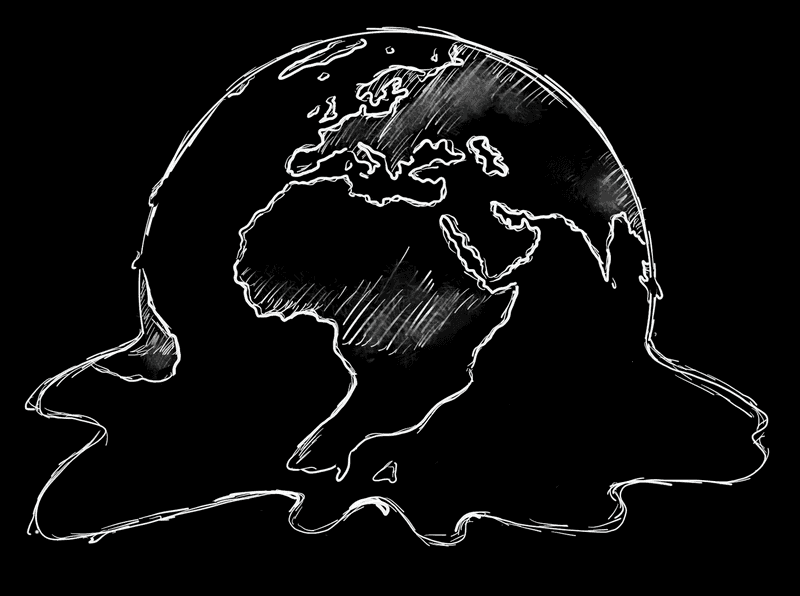 Some of my visual experiments haven’t even involved drawing – for example, I like how slides come out if I just use some super-sized icons from the noun project. 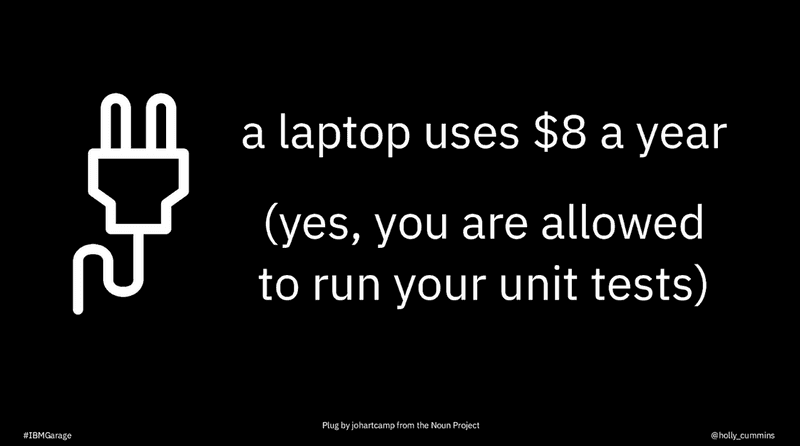 Even after all my practice, there are some things I just can’t draw. Rather than going all the way back to just-photos, I’ve had good experiences with a hybrid style. I think it’s more expressive than either photos of drawings alone. 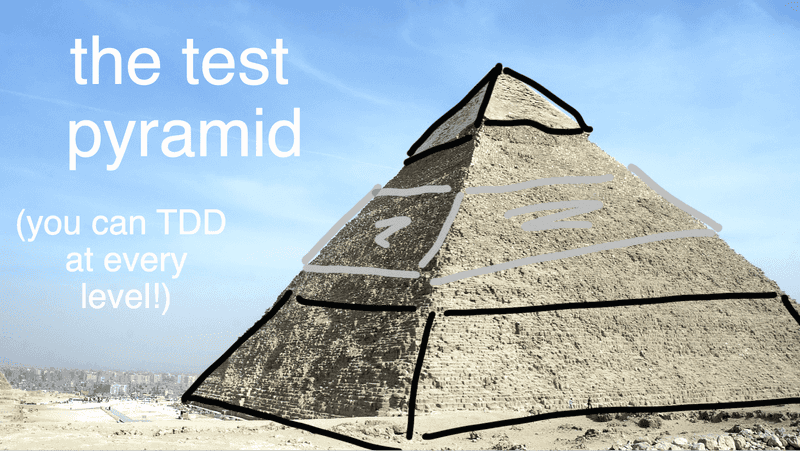 2020, annotation animations on top of a photo

The tension between the two media gives the slides an extra energy, I think. 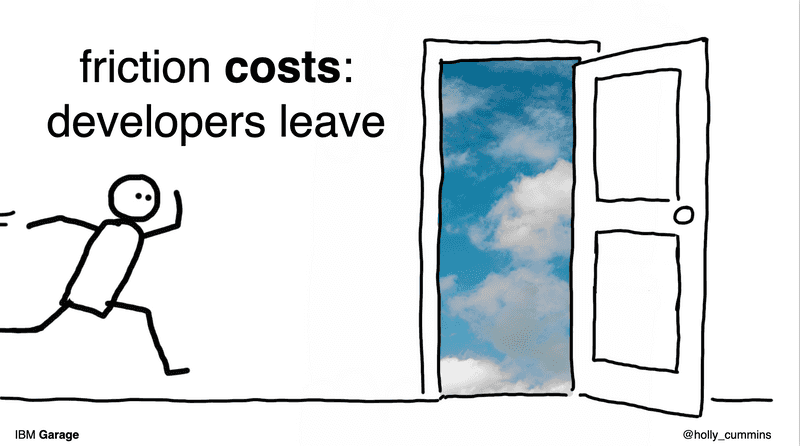 Hybrid works well with icons and photos, too. 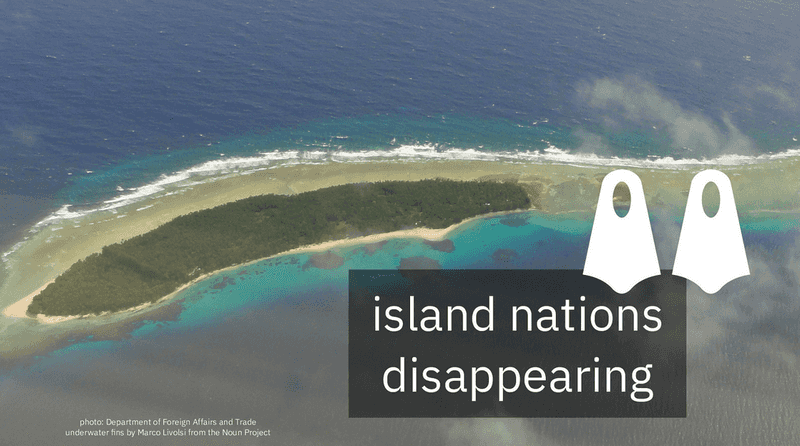 Not every experiment is a success. I had to abandon a new style of stick figures halfway through drawing a presentation because they were all turning out improbably phallic. “NSFW presentation through incompetence” is a milestone I hope to avoid.

People sometimes ask me about my drawing process, so here are some details. I started out drawing on paper, with sharpies, and then using a scanner to digitise them. It worked, but it was labour-intensive, and I could only do it at home. No last minute revisions to the slides for me. Not that I would ever leave a presentation to the last minute. Obviously. 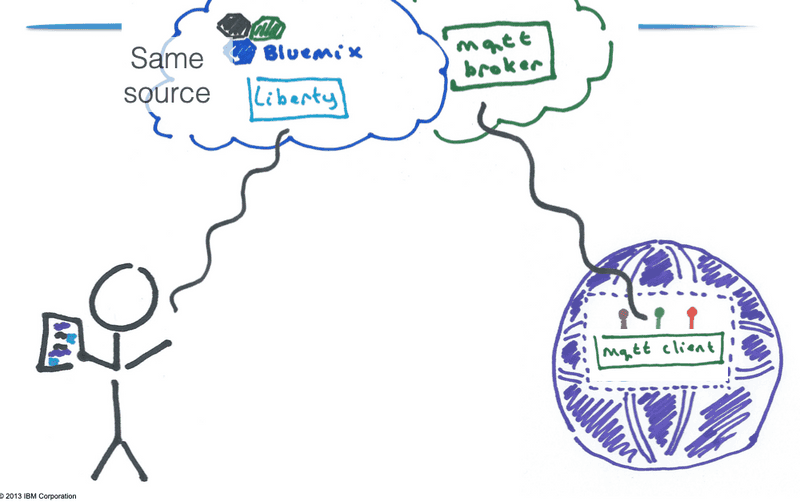 An example drawing done with Sharpie on paper, 2015

Eventually phone cameras got good enough I could use them instead of a scanner, so that made the process a bit more portable, but it was still slow. I saw Marlena Compton do some amazing sketching using the Paper stylus and an iPad app, so I switched to digital. (Marlena can even give a talks by live-drawing them, which is something I’ve never been brave enough to attempt.) Going digital meant I could trace from photos, and also experiment with different brushes and ‘pens’ beyond just sharpies. 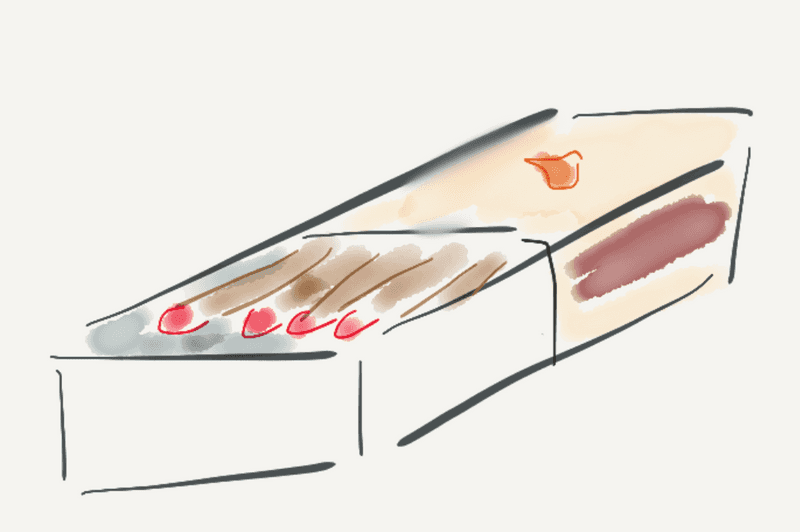 An drawing using the Paper app and stylus, 2016

However, the first app I used was more targeted for note-taking, so my drawings were disappointingly pixelated on a big screen. 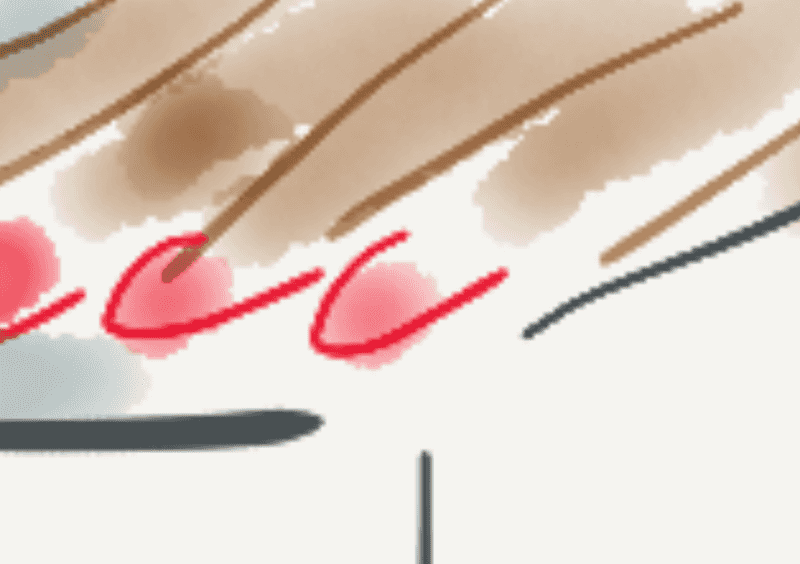 Look at all those pixels on the diagonal lines, yuck.

When the iPad Pro and Pencil came out, I switched and haven’t looked back. Even though I only use a fraction of the power of my drawing app, I can use layers to undo errors or build up animations, I can shade, I can smudge … I use Tayasui Sketches Pro. I like it, but I haven’t evaluated it against other apps, so it’s not exactly an expert recommendation.

As an example of what the drawing app can do, in this drawing I used stippling to give the feathers some texture. 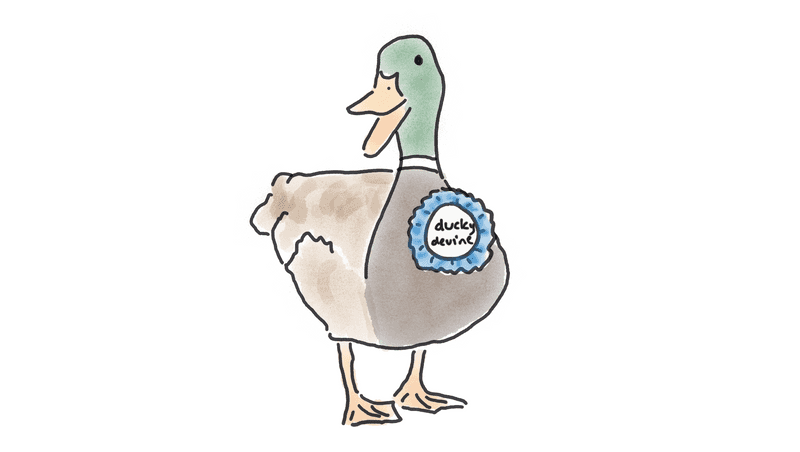 Here I used blending to try and convey depth.

How can I draw complex shapes? I cheat. I hate to say ‘fake it ‘til you make it’, but this is basically that. I trace. If I’m drawing something beyond my skill (a horse, a cat, something with perspective … well, if I’m honest, almost anything), I find a suitable photo to use as a base. (This is something digital drawing tools make very easy.) If a single photo isn’t enough, I’ll patch a few photos together. I’ve also used setpose for getting people-proportions right. It’s a digital version of the poseable mannequins artists use. 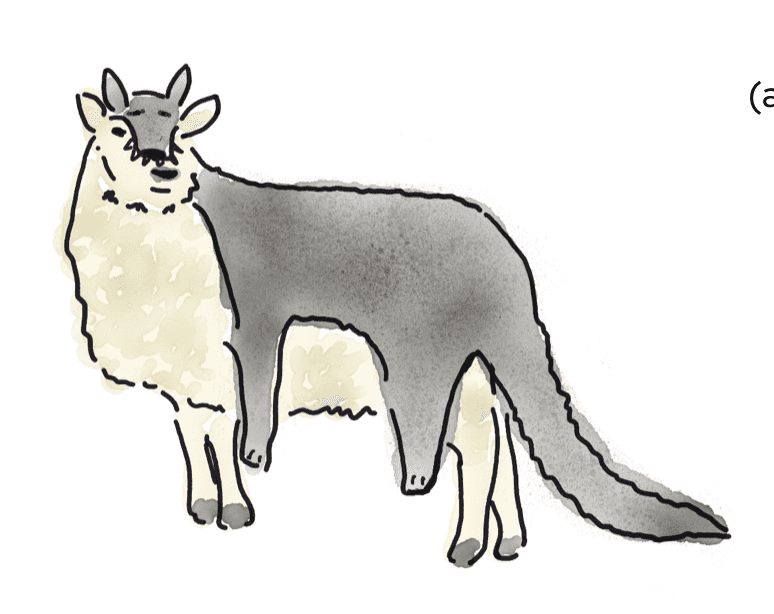 I feel a bit sheepish about tracing, but who among us hasn’t copied and pasted from stack overflow? And learned something in the process? Historically, artists were trained by copying old masters. Many still learn by copying, a practice Austin Kleon defends in Steal Like An Artist and blog posts.

I’m not sure how many artists trace, but street artist Shepard Fairey famously traced a photo for his ‘Hope’ Obama poster. (Fairey was then famously sued by AP, so even when tracing, copyright matters.)

I’ve also been told that working graphic designers trace all the time. They’re trying to do a job, so they use the tools at hand. I think the same holds for me; I’m an engineer, and the reason I give presentations is to communicate complex technical concepts. If tracing helps me do that more easily, I’m happy.

If you’re not ready to dive into a full-on tablet-and-drawing-app, there are tools available which can create hand-drawn-style graphics. They’re opinionated, so the stylistic options are limited, but the results are great, they’re quick, and they’re easy. I was impressed by Excalidraw, which was a recommendation from my colleagues John O’Hara, and, indirectly, Gunnar Morling. It’s a free web page, so the barrier to entry is basically zero. A handy thing about Excalidraw is that there are open libraries of icons, with a lot of tech icons available to drop in to diagrams (including Quarkus, naturally). Perhaps even nicer, if you paste tabulated data onto the canvas, it will auto-generate cute hand-drawn-style charts.