A year or two ago, I wrote about the connection between fashion and programming. For reasons I don’t totally understand, it’s my second most popular blog post, after my leaving IBM announcement. Apparently, people do searches for ‘fashion coding’ and ‘coding in fashion’. There’s not many results for that kind of search, so my site is the top result. A coding school has even linked to the article.

When I was writing that article, I almost deleted it several times, because it was so personal, and frivolous, and resentful. This one has almost been deleted too, for the same reasons.

I started thinking about fashion and developers again because I saw Purity Birir’s tweet. It said in 240 characters what I took a whole blog to try to say:

This isn’t just about clothes; RedMonk have written about the Developer Aesthetic without a single mention of hoodies. It’s about how communities create their own visual codes, and how that the design choices we make as individuals communicate that we belong in a group. Or, if we’re unlucky, the choices give an impression we don’t belong. (Light mode user here, hi!)

But back to clothes.

Purity is right that as a woman in tech, there is definitely a ‘wrong’ outfit. (Too short, too shiny, too frilly, too female, basically.) Women who wear the wrong outfit will be Told. 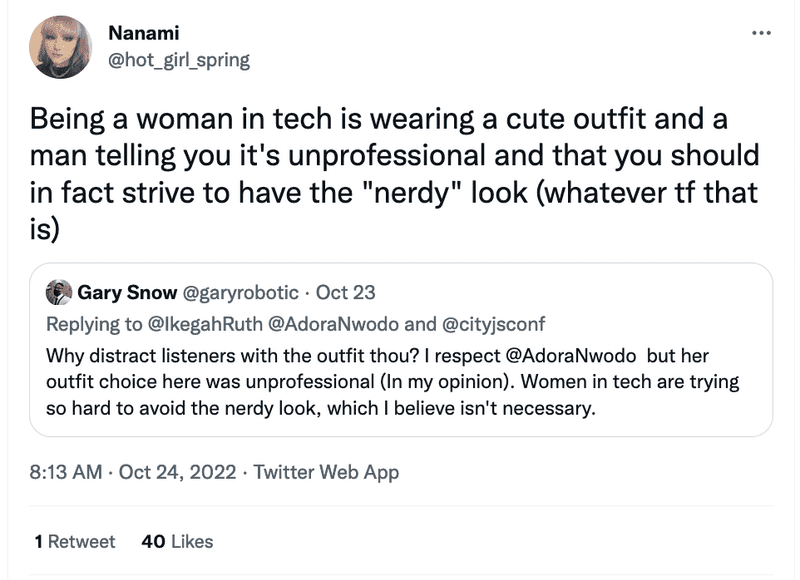 … but it’s worse than that. There definitely is a wrong outfit, but there isn’t even a ‘right’ outfit. No matter what we wear, someone might get distracted.

I’ve been thinking about this for a while, but I had a reminder this week. Eric Deandrea and I spoke about contract testing at Devoxx Belgium a few weeks ago. This week, Eric spotted this comment on our talk video:

So far, there have been no comments about Eric’s outfit, even though we were wearing almost identical clothes. 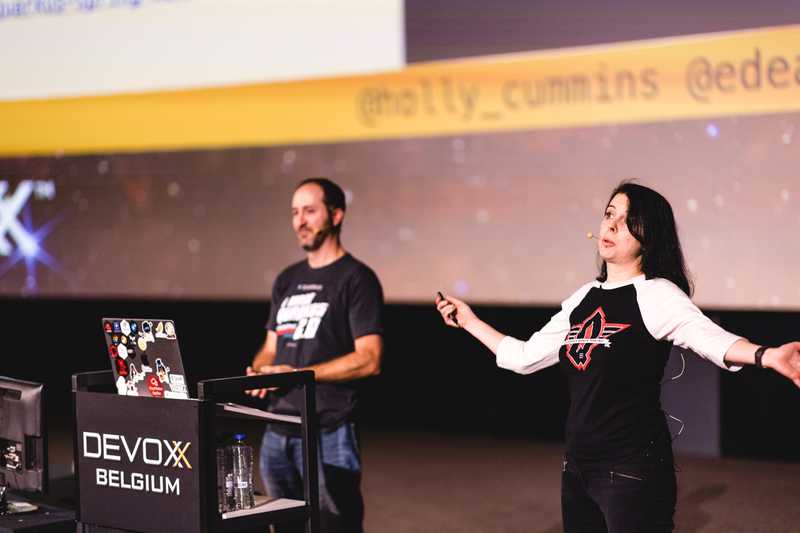 The comment was moderated out as soon as Eric reported it, but heads are harder to moderate. I’m still sad, and mad, because I try very hard to choose innocuous outfits that let me blend in with the tech herd. It’s disappointing to be reminded how totally I am not-succeeding at blending in.

Ok, if I’m totally honest, I could try a bit harder to blend my shoes in. Here’s a still of the “high heels” I’m wearing in the video:

I usually wear block-heeled boots, unlike most of my tech colleagues. On the other hand, my experiments with flatter shoes have not been particularly successful. I clomped around in Doc Martens for half of Devoxx, in an attempt to blend in. I was uncomfortably short and the heavy Docs shredded my feet so thoroughly I still have blisters several weeks later.

I do agree with the commentator about one thing: I’m not sure the Quarkus t-shirt I’m wearing is my best look.

I have a conflicted relationship with tech-product t-shirts. Branded t-shirts are a standard speaker uniform at conferences. I wear them because my male colleagues do, and because I want to fit in, and because I’m proud of my product. But branded t-shirts look very different on women than they do on-men.

Even when branded t-shirts physically fit, they can be uncomfortable. GeekFeminism did a great analysis of the hazards of having a bust. T-shirts with a picture over the chest area, by definition, draw attention to the wearer’s chest. That’s not a problem for men, but it is for women. Because women tend to have bumps on their chest, logos sometimes deform in weird ways, and really draw attention to the breasts. That’s the exact opposite of the “blending in” that I’m hoping for.

There’s a more subtle problem, too. Tech t-shirts just aren’t my natural style. I find them hard to make into an outfit. That matters, because “borrowed someone else’s t-shirt for the day” is not a look which says “expert on the subject”. Tech t-shirts look ridiculous with most of the trousers I own, apart from one or two pairs of jeans.

Why can’t I just wear what I want? Well, it means I’m not representing. And if I wear the clothes I feel most comfortable in, I get told I look corporate. This isn’t a hypothetical; it happened a few weeks ago while I was in a conference hotel wearing my comfy home clothes, on an ‘off day’ between events. No malice was intended, I just … did look kind of corporate.

What’s the solution? I don’t really know. We need to focus on what women speakers say, not their shoes or t-shirts. We need to embrace the #ilooklikeadeveloper hashtag. We need to let our clothes out of the closet. And we need to normalise diversity in tech - not just of people, but of outfits.